Of all the special racks and platforms available for use with your precious audio gear,
none is as important as the stands necessary for so-called bookshelf speakers. Their first
function is to raise the speakers to an appropriate height–usually placing the tweeter at
ear level–and thus many manufacturers recommend certain stands for use with their
speakers. However, perhaps just as important as the height of the stands is how they
support the vibrating boxes that sit atop them. In this regard, a speaker stand should act
as both rigid foundation and resonance sink, killing or filtering off as many bad vibes as
possible. And it is in these last two functions where merely good speaker stands are
separated from the great ones, the improvement in the sound that the speakers produce
being the ultimate measuring stick. 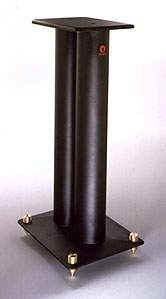 Osiris Audionics is a new company that thinks it has
the ideal formula for making the best speaker stands you can buy. Its Osiris stands begin
as heavy pieces of steel and end as a heavy and elegant-looking pair of stands. The top
and bottom plates are 1/2″-thick pieces of steel. While the top plate is completely
flat with rounded corners, the bottom plate on which the support pillars rest is
semi-pyramidal in shape. Michau Jay Yuen, the president of Osiris Audionics, explained
that this shape was chosen over others because of how it dissipates energy–acting like an
inverted cone and ultimately providing greater isolation and resonance transfer for the
speakers. The Osiris stands weigh 40 pounds each, and the two round pillars, 3.5″ in
diameter, that connect top and bottom plates can be filled with sand, lead shot, or a
combination of both to add mass and control resonance. I used sand exclusively and found
that each pillar holds over 10 pounds worth, which makes the stands weigh over 60 pounds
each–even more if you use lead shot. Osiris Audionics makes 19-, 24- and 27-inch models
of the Osiris stands, and these heights should accommodate a majority of the bookshelf
speakers currently available.

Osiris Audionics has obviously created the Osiris stands very deliberately, and it
seems that they haven’t missed a trick. The stands are solidly built and come with a
number of accessories that either help make setting the stands up easier or improve their
performance with your speakers. Included are a printed guide that covers setup, a paper
funnel to aid in the sand- or shot-filling process, and even a few black dots that you can
put over the fill holes in the top plate once you’re finished. The stands also have the
most substantial and user-friendly spikes I’ve seen–solid brass, 7/8″ round, 2″
tall, and nicely threaded. They screw into and through the bottom plate, making adjustment
and leveling an easy task: just slip a quarter into the notch on top of the spike and
turn. No fumbling around while you try to twist narrow spikes that sit under the
heavy stands. Very nice.

The sand-filled Osiris stands, 24″ in height, were used exclusively in my budget
reference system along with Merlin TSM
speakers (follow-up review coming). I used a CAL DX-2 CD player as well as electronics
from Mesa, Joule Electra, and Clayton Audio.
Cables were from DH Labs. I used stock power cords (gasp!) most of the time, although I
did experiment very successfully with power cords from JPS Labs and Audio Power Industries.

I used a matched quad of Fun-Tak blobs to couple the Merlins to the stands, but before
I even attempted this I leveled the stands to make sure the speaker drivers would fire
perfectly straight ahead. Don’t take this step for granted–a slight variation in
angle at the speakers can lead to a large anomaly in tone at your listening seat, so take
the time to level the stands, and then ensure that the speakers themselves are also
leveled once they’re seated on top of the stands. Your ears will thank you.

Before you ask the question yourself, I’ll ask it for you: how does one evaluate the
sound of a pair of speaker stands? A good question, especially when you combine it with
the fact that I had no access to other speaker stands of the same or similar height for
direct comparison. Hmmmm. Well, I’ll say right here that this review is by necessity a
work in progress, but there are a few aural conclusions that I was able to draw. First,
the Osiris stands are incredibly rigid, and this attribute helped couple the Merlin TSMs
solidly to the weight of the stands and, of course, the floor below, reducing the
speakers’ susceptibility to internal and external vibration. This seemed an especially
easy conclusion to draw given the midrange of the TSMs, which, like that of the Merlin VSMs and VSM-SEs, was very impressive. Wonderful
clarity and transparency were mixed with just a touch of sweetness. The price of the TSMs
and the Osiris stands is $2579, and I don’t know of a pair of speakers in this price range
that equals the way the TSM/Osiris combination re-creates voices, which just sounded
distinctly there.

Another salient feature of the Osiris stands is their ability to damp unwanted
vibration and resonance, keeping these away from the speaker cabinets and thus the
drivers, which have enough to worry about. If I touched the cabinets while the music was
playing, I obviously felt vibration from the sound. If I touched the top plate of the
speaker stands, the vibration was almost nonexistent. But if I touched the sand-filled
pillars, even near the top plate, there was nothing. Although the sand certainly has a lot
to do with this, I can’t help but think that if the pillars were smaller in diameter and
thus held less sand, the vibration would have more of a chance at turning the entire stand
into a vibrating mass that would certainly affect the sound of the speakers. It only makes
sense.

All in all, I had nothing to fault with the speakers that would lead me to believe that
the stands were somehow responsible. On the contrary, I always had the sense that the
impressive sound had something to do with the solidity of the Osiris stands.

The Osiris speaker stands have been a great success when used with the Merlin TSMs, and
I suspect that they won’t disappoint with other speakers as well–the ProAc Response 2s
and 1sc models come quickly to mind. The Osiris stands are heavy and incredibly inert, but
even so they are surprisingly easy to set up, including the dreaded duty of filling them
with sand or lead shot. And they look like a million bucks, the perfect complement to the
uptown Merlin TSMs. I can just see the two of them together in a Manhattan loft, in front
of a long wall of pickled-oak bookshelves and flanking a glowing rack of fine ancillary
equipment. Ah, the good life.

Only as other speaker stands show up for evaluation will I know the full measure of the
Osiris stands and their contribution to the stellar sound I get with the Merlin TSMs. It’s
only fair, however, to give at least some of the credit at this point to the Osiris
stands–their function may be simple but the sound they help produce is complex and
involving. Perhaps the best way to sum things up is to convey the thoughts of Merlin’s
Bobby Palkovic, who loves the Osiris stands, believing that they outperform his previous
favorites with the TSMs, the Target R4s (which cost $250 more). There’s opinion and then
there’s truth.

All prices listed on this website are subject to change without notice. We do endeavor to keep them current, but it is always best to contact us for the most current pricing.

Just in, this one owner used Rega RP10 turntable is about 9 years old and in really good shape. We have given it a thorough check-up and it is in perfect working order and comes with two few month old Rega Reference EBLT turntable belts as well as the original pair of Rega white reference belts. This table does not come with a cartridge, but we can work up a package deal for you with any number of great cartridges from Rega, ClearAudio, Hana, Kiseki, and Dynavector. If you wan the table as is, it is yours for $2,900 plus shipping. It is complete with factory box, packaging, and all documentation. When you consider a new Planar 8 $3,495 and a new Planar 10 $6,345 - this used RP10 is great way to get a really good turntable and a very reasonable price.

Please feel free to call, e-mail, or message us with questions or a request for cartridge package quote or purchase!

Looking for the ultimate "table radio" HiFi rig? The iFi Audio Aurora is what you are looking for. Yoou can send audio to the Aurora via BT, Airplay, analog, SD card, and other methods. You can also use it as a sound bar for your TV! Its loaded with DSP features for tailoring the sound of the Aurora to any room. It utilizes a tube preamplifier and a solid state output stage powering a high quality 2 way speaker system. It is all wrapped in a real wood bamboo enclosure. This used Aurora is not more than a year old and in mint condition. Retail is $1,499 new, this lightly used like new unit is yours for only $995 plus shipping. ... See MoreSee Less

For more details on the Aurora see: ifi-audio.com/products/aurora/

That thing is cool!

Looking for something big, warm and grand for yourself for the holiday? How about this sweet used 60W/ch Ars Sonum Gran Filarmonia integrated amp. Pure push pull class A power and packed full of premium parts (V-Cap Copper Teflon and Mundorf Supreme Silver/Gold/Oil capacitors just to name a few). No fancy amenities (no remote contol) just amazing pure sound. Just 3 years old, this amplifier is in excellent condition (fresh/strong tubes) with factory packaging and manual. Retail new these are $9,500, this used Gran Filarmonia is a great amplifier for only $5,450.

Price does not include shipping. Please feel free to e-mail, call, or message with any questions or your request to purchase.

This used Ars Sonum Filarmonia SJ integrated amp is in excellent condition with strong (fairly new) tubes and complete with factory box and manual. This particular Filarmonia is around 12 years old and its original circuit board was replaced with a brand new one (with updates) in 2014 due to incident the owner had with the amplifier. This amplifier also has a full tape loop option (implemented for customers who owned Merlin VSMs with the BAM EQ unit) which we can remove/bypass for the buyer at no extra charge. Since that time the amplifier has worked perfectly and we have run the amp through a complete set of facotry measurements to ensure it is working 100% to spec. Retail new these amplifier where $4,500, this used Filarmonia SJ is just only $1,900 plus shipping. ... See MoreSee Less