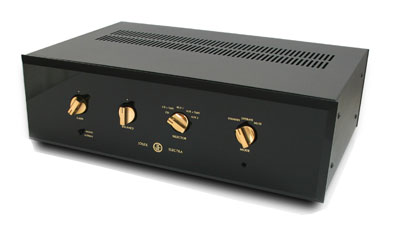 Joule Electra is introducing a new preamp, The LA-300ME, that incorporates all the features that have made the LA series of preamps the most sought after preamp in Hi End Audio. This preamp is in memoriam to the Co-founder of Joule Electra, Marianne Electra Barber who passed away after a long illness in May a year ago. The new preamp is a highly refined version of the LA-150 which incorporates exotic capacitors through out and signal wiring designed specifically for Joule Electra by well known cable designer David Elrod of Elrod Power Systems. The signal wiring combines a combination of 6 nines silver and copper in a unique transmission line configuration that David has just developed for his premier interconnects. The signal path capacitors are a mix of V-Caps and Mundorf Silver, Gold and Oil which represents the very best capacitors available to the High End Audio Community. The “super chargers” in the power supplies are huge Mundorf M-TubeCap capacitors which combine a high degree of dielectric strength and low residual inductivity. These capacitors can supply, very quickly, extreme peak currents and can be heard and felt. 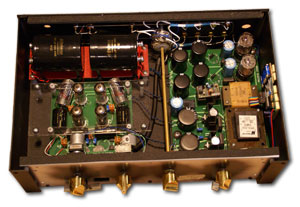 These dramatic improvements represent a major cost addition to the design and based on the sonic splendor of the new preamp the cost is well justified. The bass line of the preamp has always been one of it’s major assets, but now the bass is much crisper and cleaner, more articulate with improved dynamics, slam and extension. The midrange, one of the outstanding features of the LA-150 is now wonderfully fleshed out with a highly organic nature that must be experienced to fully appreciate. The improvement in treble extension and clarity is immediately noticeable with silky highs possessing the gloss and crispness of the original performance.

The LA-300ME is a BOLD NEW PIECE OF AUDIO ELECTRONICS for
the discriminating music listener.

POWER SUPPLY ISOLATION – The first thing you will notice is two separate construction boards. The larger one contains the power supply, and the smaller one is the “Signal Board”. The power supply board uses broad copper traces to connect the major components, but some of the heavy current is direct connected with separate insulated conductors.

HIGH ENERGY STORAGE – The next thing you will be aware of is the large number of capacitors, over 20,000 microfarads of energy storage. They are used in the two regulated filament power supplies and two separate tube regulated B+ supplies.

HIGH COST TUBE REGULATION is found in only a few products available to the audio enthusiasts.

POINT-TO-POINT WIRING – Then you will notice that the smaller board, the “Signal Board” is unique in that it has NO traces. That’s right all the connections are point to point with the component’s lead wire being the only wire on the board. Each connection point is a large copper pad on the board where all the leads are sealed together with silver bearing solder. This construction technique is unique to Joule Electra. 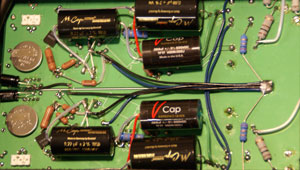 PREMIUM QUALITY PARTS – Further examination will reveal that all the resistors are expensive Vishay metal foil and metal film. We auditioned several different brands of metal film resistors and the Vishays were head and shoulders above the rest. The Vishay metal foil resistors used in the signal path are well know as the best available for audio. The capacitors used in the final B+ circuit and signal path are a mix of Mundorf (Gold/Silver/Oil and M-TubeCap ) as well as V-Caps (both Oil and Teflon), the best available at any cost. And cost they do; more than 20 times the cost of other high quality caps. Bocchino or WBT silver NextGen jacks, best in the industry, are present in the signal paths and the wiring for the signal path is custom designed by Elrod Power Systems mentioned above.

HIGH-TECH CHASSIS and 3D DESIGN – Now for the icing on the cake, and you may argue that it was the first thing you noticed. The signal board is mounted on an exotic tri-flex suspension system to isolate it from the cruel world of vibrations and feedback. State of the art materials are used for this including “EAR” vibration bushings and ISO-DAMP sheets. Moreover it allows for three-dimensional EMI and other interactions to be optimized for the best sound possible. Where have you seen this before? Probably nowhere!

TUBES ONLY – And now the last straw–six, yes 6 tubes in a line stage only preamp. Four carefully selected Sylvania 6350’s for the Gain Stage and Mu Follower, and separate 6EM7 regulator tubes for the B+ supply, industry standard since the fifties. All Joule-Electra tubes are carefully selected NOS tubes and have exceptionally long life span. The large output tubes (6C33CB) used in our OTL’s have a life of 5 to 10 years. We have older amps (+10 yrs) that have had no tube replacements. Same for the small tubes

WE LISTEN – The LA-300 has a stereo/mono switch by popular demand. To prevent this feature from causing crosstalk between channels a triple pole switch is used with the center contacts grounded. Channel crosstalk is >85db.

PURE DC – Now you will notice something funny. At the bottom of the signal boards there are two batteries (yes the batteries are included). They are part of the adjustable bias circuit and insure that pure DC is on the signal grids of the gain stage. Critical listening has shown this to be significant in producing the sonic signature of the LA series of preamps.. The result is clear, open treble, rich, full upper midrange; warm balanced lower midrange; and a solid deep bass presentation. Again unique to Joule Electra.

MAXIMUM CHANNEL SEPARATION – The next funny (read innovative) thing you will notice is the brass shaft that connects the selector switch to the front panel. You will see this on a lot of preamps but the switch won’t have multiple decks and wide spacing like the one found on the Joule. It shortens the length of the signal inputs and reduces cross talk between the channels. The multiple decks allow paralleling of the contacts which reduce the lack of transparency caused by the single contact arrangements found on most preamps, even the Joules’ competition.

SIMPLICITY – The second duty this switch performs is to allow all switching functions to be done with one switch. The tape monitor loop is available between each of the selector points eliminating the need for another switch. Each input is “virtual direct”.

SONIC EXCELLENCE – You will now note the unique “shunt to ground input block”, using custom pots made to our specifications. This volume/balance system is completely passive and functions outside of the signal path. The signal passes through four Vishay metal film resistors and then directly to the input tube grid.

All prices listed on this website are subject to change without notice. We do endeavor to keep them current, but it is always best to contact us for the most current pricing.